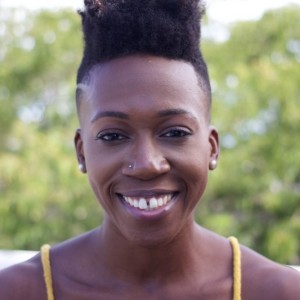 Grant Type: PROFESSIONAL
$1,000.00
Use of Funds: fee for Cannes program

Robin is a writer, filmmaker, entrepreneur, and Bronx, NY Native with a B.A. in Journalism from the University of D.C. and a Master’s in Sports Management from Georgetown University. She was an assistant women’s basketball coach, and assistant athletic director at The University of D.C. for 5 years. Robin’s first short film, “Garden of Eden” (2017), was selected into the Cannes Film Festival Creative Minds Short Film Corner Program. Robin writes for film and TV, dedicated to creating content reflecting diversity in media, specifically the Black LGBTQ+ community. Her goal is to bring “Garden of Eden” to different audiences to spark conversations around topics such as the effects of hyper masculinity in the LGBT community. Robin lives in Philadelphia and is Managing Editor for the New York-based online publication SOULE.lgbt. She also facilitates therapeutic writing and mindfulness workshops in Philadelphia, teaching participants how to use writing to heal trauma.

SBMA took a moment to check-in with Robin on what she has been working on in recent months.  Watch the video as she shares her reaction to receiving an SBMA micro-grant, then read her interview about her recent creative work and experiences this Summer.
===========================

Tell us, what have you been up to this Summer?

I went to France to screen my film as a part of Paris Black Pride. After the screening, a talk back discussion was held on the topic of hyper masculinity within the LGBT community.
What were some exciting new things you got to experience?
During my stay in Paris, the French national soccer team won the World Cup so that was a wonderful experience.  After screening my short film for Paris Black Pride, I was asked by an LGBT organization to facilitate a writing workshop at the Paris LGBT Center.
What was something meaningful that you learned through that experience that you will bring back to propel your artistic work forward or engage more with your artistic community?
One thing that I have learned from this experience is that as a filmmaker, there is no better point of creative reference then being around people in their natural element. No matter what the cultural or language barriers, life experiences can be, and should be documented because life is the great equalizer. Seeing how my work and creation of work has connected me to people who I may have otherwise never have met, motivates me to continue documenting, creating, and sharing.

Because of my experience witnessing the World Cup win while in France, I was able to speak with and interview many queer Black Paris natives about what the win meant for unity within Paris.  From these conversations I was inspired to create a short film which is currently being edited. The film will then be submitted to Philadelphia Public Broadcast television via my membership with PhillyCam.
What do you have upcoming that we should look out for? (if you have dates, please put them)
I currently have a project in production called “Shaded,” which is a documentary about people of color recounting their first encounter with colorism. The purpose of this film is to bring up the fact that POC are socialized to colorism at such early ages and these first encounters ultimately affect the way we show up in the world as adults.
I am also currently in production with a web series that I am writing in directing and is produced by SLAYTV. The web series is called “Problematic” and follows queer 20 something’s Avery – a queer questioning Black woman, and Avery – a Black trans man, as they navigate their experiences adulting in gentrified Harlem, NY. The 6 episode first season is scheduled to premier in the Winter of 2019.